Snook fishing in Tampa/St. Petersburg with Captain Wade Osborne is a drag screaming experience. People travel from all over the world to tangle with this highly acrobatic and prized Florida species. Methods for catching snook include spin casting with live-bait, plug, jig, and fly fishing. Snook can be pursued year-round with most fish weighing between three to 10 pounds. During May, June, July and August when the largest of the “linesiders” are spawning, catching 30 plus snook during one outing is commonplace with some fish weighing possibly 10 to 25 pounds. When winter rolls around snook seek shelter from the cold and stack up in certain locations. When this occurs, it’s possible to catch over 100 snook per charter. 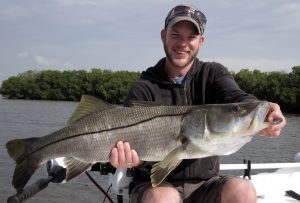 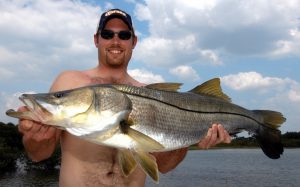 Osborne targets mangrove shorelines, grass flats with sandy potholes and oyster beds when pursuing snook. Nothing is more exciting than watching a snook inhale a fly, plug or jig. When using live scaled sardines, Osborne fishes the same areas, but he anchors the boat and employs a live-bait chumming technique. Baits are squeezed by hand and broadcast in an area with fish to trigger them to feed. Then hooked baits are presented in the same spots for a solid hook-up. 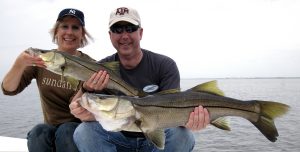 Landing a snook is often a battle of wits. You have to take into account you’re fighting a fish in its own home territory. They know where every oyster and mangrove root is located and will use it to their advantage to cut themselves free. The initial run is often the deciding factor in landing a snook, even when free of all the hidden obstacles, the leader could still be severed by a snook’s razor sharp gill plates. 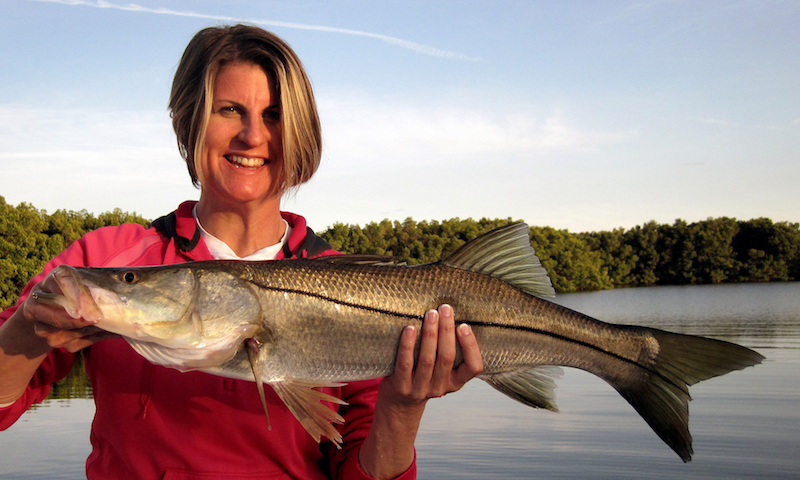 Closed to harvest December 1-February 28 and May 1-August 31.

One fish per person, per day when open for harvest.