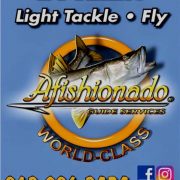 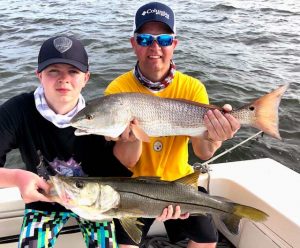 Grant and Brian Perry with a snook and redfish.

The grass flats are becoming the most active since last fall. Baitfish have begun to invade the flats and the snook, redfish and trout are there to welcome them to breakfast, lunch and dinner. If you hit the tide right, the action can be non-stop. That’s the reason I don’t always start my charters at the crack of dawn. Many days, I don’t pick up clients until 11AM or later.

Even though, I may not see my clients for hours after sunrise, I still leave the dock before dawn to go catch bait. During the time in between, I’m busy cleaning the boat and rigging tackle. I may even scout some fishing locations for later. Once my passengers are aboard, we’re ready to fish. Depending on the current conditions, my first stop may only be five minutes from the dock. I always have a game plan before my charter shows up. That way, I utilize their time fishing, not sightseeing.

During the spring, snook, redfish and trout sometimes feed in the same areas. There are numerous days when you might catch all three species. That’s considered an “Inshore Slam.” Believe it or not, I’ve had many Floridians aboard that have never achieved this feat.

Another bonus about April: The Spanish mackerel are starting to migrate into Tampa Bay. They are a blast to catch on light tackle because they hit hard and make extremely long runs. The mangrove snapper fishing is picking up also. Snapper and mackerel can be caught in the same places at times. So, for clients that like to keep fish they’ve caught for dinner, now is an excellent time.