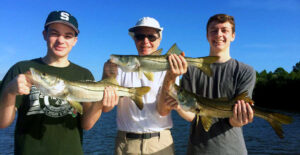 Last month was one of the coldest Januarys on record, and to say it had a negative impact on the fishing, is an understatement. It was so cold it even slowed the activity at the power plant outflows. Water temperatures dropped into the mid-50’s. If it had dropped much lower there could have been a massive snook kill, like the one back in 2010. That year, an estimated one million snook died statewide due to a prolonged freeze.

Sheepshead don’t mind the cold, fortunately. Heck they spawn in the winter, so they must like it. They school up in large numbers this time of year and are easy to catch. Shrimp, fiddler crabs and even barnacles are all good baits to use when pursuing sheepshead.

Some spots that are often overlooked for sheepshead are deep water rock piles and artificial reefs. These underwater structures can be found throughout Tampa Bay. I check my local tide chart and fish these spots around a slack tidal flow.

What about mangrove snapper? Unlike sheepshead they spawn in the summer, but they do seem to have a decent appetite in the winter. Many times, you can catch them in the same areas as sheepshead. Just don’t expect them to eat barnacles. Shrimp or scaled sardines are the baits of choice.

Cold fronts pass through our area on a weekly basis this time on year. If you have the flexibility in your schedule It’s best to wait a day or two after a front to go fishing. Once the weather settles down and the temperature rebounds into the 70’s, so does the snook fishing.

February offers some of the best snook fishing of the year. Days of catching 50-plus snook are numerus, because certain areas shelter snook from the elements, so they migrate there during the winter. These oases continue to hold large numbers of snook right through March and into early April.

So, if you want to experience some non-stop snook fishing, now’s the time to give Afishionado a call.