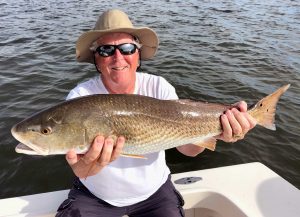 Now that spring is upon us, the grass flats are starting to come alive. March without a doubt is the kickoff to a great fishing season. Last month the water temperatures started off in the upper 50’s, but as February progressed, they warmed up 10-12 degrees. Now the water temperature is in the low 70’s.

This month, scaled sardines begin moving back on the grass flats. When this occurs, gamefish follow. Without a doubt, March is all about snook and redfish and for pure enjoyment, catch and release redfish and snook fishing is hard to beat.

Redfish for most of the winter have been scattered though out some flats, creeks, residential docks, and canals. Now they’re beginning to chase baitfish on the grass flats, mangrove shorelines and around oyster beds. When I spot a school of redfish on the prowl, I anchor my boat and start chumming. Doing so, gets them to stop and eat. Then it’s just a matter of casting a hooked bait into the mix.

When it comes to locating some snook, they will be exiting their winter haunts and shattering about the grass flats. Mangrove shoreland points are good areas for catching snook, because they create an ambush spot during a strong tidal flow. Areas sprinkled with sandy potholes are excellent locations to tangle with snook also.

Spring officially begins on the 20th, but don’t wait until then to spring into action!

Baby, it’s “Been” Cold Outside!