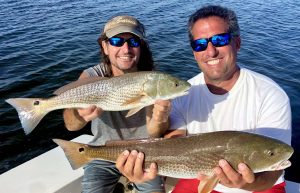 The JERSEY BOYZ, brothers Drew and Dean Paolella from Madison (exit 14) spent the morning trying to out fish each other while on a school of redfish.

Despite the lingering presence of red tide all along the coast from St. Petersburg to Tarpon Springs, Tampa Bay remains unaffected. Beach anglers continue to struggle to catch fish due to the ever-changing migration of the algae bloom. Low to high concentrations remain scattered throughout the region. The only way to stay on top of it, is to check the FWC’s Red Tide Status Report daily.

As for where I fish in Tampa Bay, the fishing is outstanding!

The redfish fishing has kicked into high gear on some the flats. Usually, the big spawning breeders start showing up just offshore, and at the mouth of Tampa Bay in October. However, that may not happen this year due to the red tide. Time will only tell.

The snook fishing has been good all summer long. As the days get shorter and the water temperatures slowly drop throughout the fall snook begin to feed even more. I’ve been catching snook, redfish, trout, and mangrove snapper in some of the same spots.

As for mangrove snapper, this has been the best year for catching these tasty treats that I can remember. They have literally been everywhere. I look for this to continue right up to mid-November when some strong cold fronts start moving through.

Seatrout are in no shortage on some of the grass flats. Most are in the 12-15-inch size range, but the numbers are impressive. I imagine the larger fish will become more active as the water temperature starts to drop.

The Spanish mackerel fishing was hit particularly hard in Tampa Bay during this summer’s red tide. Even though they were hard to come by then, they are now making a huge comeback. I expect it to only get better in October.

Speaking of October! The FWC plans to reopen snook, redfish and seatrout to harvest on October 11.

The official start of fall is on September 22, but don’t wait until then to book a charter to won’t soon forget. The phones lines are open!

The Fishing Continues to Excite in Upper Tampa Bay.