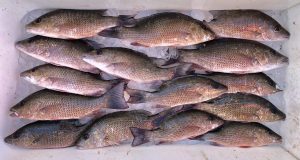 The Spanish mackerel fishing is excellent right now, and they’re good table fare. The key to having tasty mackerel fillets is to ice the fish down the second you bring them on the boat. Some people swear you should bleed them also. I’ve done it, and I don’t think it made a difference in taste. It did make a bloody mess in the cooler, however. You can bake it, fry it, grill it or my favorite, smoke it!

Another tasty inshore fish you can rely on during the summer months are mangrove snapper. Their spawning season runs from June through September. During this time, they’re the most aggressive and easiest to catch. I like to target mangrove snapper around bridge pilings, rock piles, artificial reefs and, believe it or not, mangrove shorelines adjacent to deeper water. They’re not called mangrove snapper for nothing!

I like to whip them into a feeding frenzy, by anchoring my boat up-tide of my fishing spot and starting a fresh cut-bait chum slick. Some anglers use frozen chum blocks sold at tackle shops but cutting it up yourself is better. Most people are lazy!

Once I have a good chum slick established, the snapper will literally be swimming to the boat. Then it’s just a matter of drifting a bait back within the slick to get a solid hookup. Best baits: Small white bait, small pinfish or just a chunk of cut bait.

Tampa Bay redfish are feeding heavily around oyster beds during high tides. Once water is covering previously exposed oysters, redfish like to move in and pick off any crustaceans that are accessible. Most times, if you catch one redfish, more are around. Locate a school of fish and you can catch them for hours on end. Many of the same areas I’m catching redfish are loaded with quality snook also and catching 20-40 an outing is the norm.

Snook are scattered all over the flats making it possible to catch them just about anywhere. It’s also spawning season for snook, so the large breeders are staged up and easier to catch.

Redfish and snook are catch and release only right now, but for pure sport, the actioning can’t be beat!