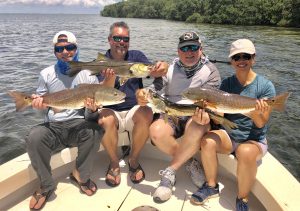 The northern tarpon migration, which coincides with their pre-spawn ritual, brings thousands upon thousands of tarpon to our area is in full swing. This gives anglers a shot at some of the best Tarpon fishing in the world during May and June.

There are many techniques used to hook one of these beasts, but two of the most productive are: 1) anchoring and chumming in the passes; and 2) cruising the shoreline and tossing baits while sight casting. Either method will get the job done, but you must be persistent and have patience.
Tarpon are some of the most rewarding or disappointing fish to pursue. There are days when you’ll see thousands of fish and you’ll never get a bite. Other days, you may not see as many, but the hook-up ratio is outstanding. Occasionally, you may want to give up, but If you keep at it, you will have success.

I’m not talking about a few fish either. Many days, the non-stop action can last for hours when the conditions a right, you have a live-well full of bait and you chum continuously. Double, even triple hookups are common. Redfish and snook are catch-n-release only right now, but there are other inshore species to target for dinner.

Spanish mackerel are another fish worth targeting now also. They’re also good to eat, though some people may disagree. The key to having tasty mackerel fillets, when you get home, is to ice the fish down the second you bring them on the boat. Some people swear you should bleed them also. I’ve done it, and I don’t think it made a difference in taste. It did make a bloody mess in the cooler, however. You can bake it, frie it, grill it or my favorite, smoke it!

When mackerel fishing, I’m chumming non-stop so, other fish are drawn into the slick. Such as bluefish, ladyfish, jack crevalle and sometimes cobia even show up in the mix. It’s also a great time to put out a shark rig.

Another tasty inshore fish is the mangrove snapper. They’re moving towards their spawning season which runs from June through September and during the spawn is when they become the most aggressive and easiest to catch. I fish for mangrove snapper around bridge pilings, rock piles, artificial reefs and believe it or not mangrove shorelines adjacent to deep water. They’re not called mangrove snapper for nothing!

Pompano are great table fair, but at times, difficult to locate. They like to hang around bridge pilings and run the swash channels along the beaches near passes. They also like to cruise along the edges of grass flats while looking for a stray shrimp or crab.

Many times, you can spot them skipping in your boat wake as you zoom by a flat. When this happens, spin your boat around immediately and work a pompano jig along the outside edge of the flat you just buzzed by.

There’re not many fish that taste better than pompano baked in parchment paper.

April Fishing at its Best!