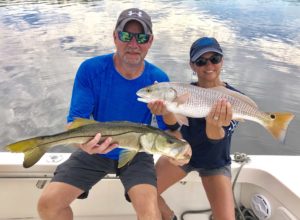 September will be here in a couple of weeks, but don’t plan on keeping any snook for dinner.

Not since the big 2010 winter snook kill have we had a harvest closure on the west coast. Estimates put the total number of snook deaths at one million, statewide due to that year’s freeze. Who knows how many died during last years red tide, but it was enough that the FWC decided to shut down the harvesting of snook until May 30, 2020. However, don’t expect to keep any next May either, because snook are always closed to harvest May – August for their spawning season. If we’re lucky, we may be able to have a grilled snook next September, but I won’t count on it.

Besides the snook closure, if you throw in fact you can’t keep any redfish or trout too, what’s an angler to do? Catch and release, that’s what!
For table fare, Spanish mackerel are plentiful along the intracoastal, off the beaches and in Tampa Bay. Last month, the mackerel fishing was outstanding and that should continue through October.

The key to getting the mackerel action going is to establish a chum slick. To help prevent cutoffs, it’s a good idea to use at least a 30-pound fluorocarbon leader and a 1/0 long shank hook. Another important tip is to use a light drag setting on your reel. If your drag is set to tight, many times a mackerel will pull the hook or snap it off with a quick bite.

You’re allowed to keep 15 Spanish mackerel per person, with a minimum fork length of 12 inches. Two things: I don’t believe anyone needs to keep 15 and a 12-inch fish is hardly worth fileting. Besides that, if you freeze them, they turn into mush once thawed. If you must freeze your mackerel, do what I do, smoke them first. That helps preserve the filet for ready-to- eat or to make smoked fish dip.

The mangrove snapper bite has been awesome and continues to get better year after year.

I’m catching snapper while cast-netting bait, first thing in the morning. They’re beating snook to the bait while I’m flats fishing. I’m catching them along jetties, on artificial reefs and around bridge pilings. They’re even being caught along the mangrove shorelines. I guess they’re not called mangrove snapper for nothing.

Tarpon and cobia are still around and even thought I don’t target them much now, I do get hook-ups while mackerel and snapper fishing.

The redfish and snook fishing has been a little inconsistent, but I attribute that to the excessive amount of runoff due to all the rain we’ve been having and the fact that the water temperature has been hovering between 85-90 degrees.

Frankly, I have never been that excited about the September return to snook harvest anyway, because it’s still too hot. The time to get amped up about inshore fishing is in October when it finally starts to cool down.